Home | The Making of Macbeth

The Making of Macbeth

In conceiving of a green-screen approach to Shakespeare, the team behind Macbeth set out to blend the best elements of cinema, theatre, design and new media to herald the opening of a new chapter on Shakespeare on film.

I. Making of video

I. Making of video

Shakespeare and computer-generated imagery might seem less than obvious bedfellows, especially when it comes to a play like Macbeth. There are no great monsters, no supernatural storms; locations resembling the castles and moors where the play is set can still be found, and beyond the occasional ghost or cauldron, the script doesn’t call for much in the way of special effects. However, our ambition was to create a virtual world not to resemble an actual location, or convince the audience that they’d seen something supernatural, but to build a theatrical environment from where the real genius of Shakespeare’s work – the words – could be projected. Macbeth is theatre, and translating this onto the screen doesn’t always fit easily within conventions of film making – how do you perform an aside when you are atop a castle and there is no audience? To whom is your soliloquy addressed when we can see there’s nobody nearby?

“Its use of green-screen technology is not just a technical triumph but central both to how Shakespeare’s exploration of the world that collapses around Macbeth can be made visually thrilling and provocative and to our engagement with a man who comes to realise how his choices destroy himself.”

In placing real, filmed actors into a world combining real, hand-drawn and computer animated scenery, we felt there lay an opportunity to create a new type of experience on film, where we place the audience firmly in their theatrical position as active participants in the production. The locations could become sets, cuts could become scene-changes, and the stage could always have a suggestion of the ‘fourth wall’, that imaginary space that separates performers from the spectators. Of course, you could just film a theatrical production and be done with it, but what intrigued us was the possibility of expanding the theatrical language with the scale, depth and intimacy that cinema can achieve. Our approach would allow us to do this in two ways: firstly, it would enable us to create an infinitely adaptable set without hiring an enormous sound stage and a team of a thousand carpenters; secondly it would enable us to craft a world that could not only act as a setting for our action, but as an allegorical device where the inner worlds of our characters can be reflected in the structure of their environment.

But how to achieve this given the constraints of budget, time and resources that an independent production like this must work within? 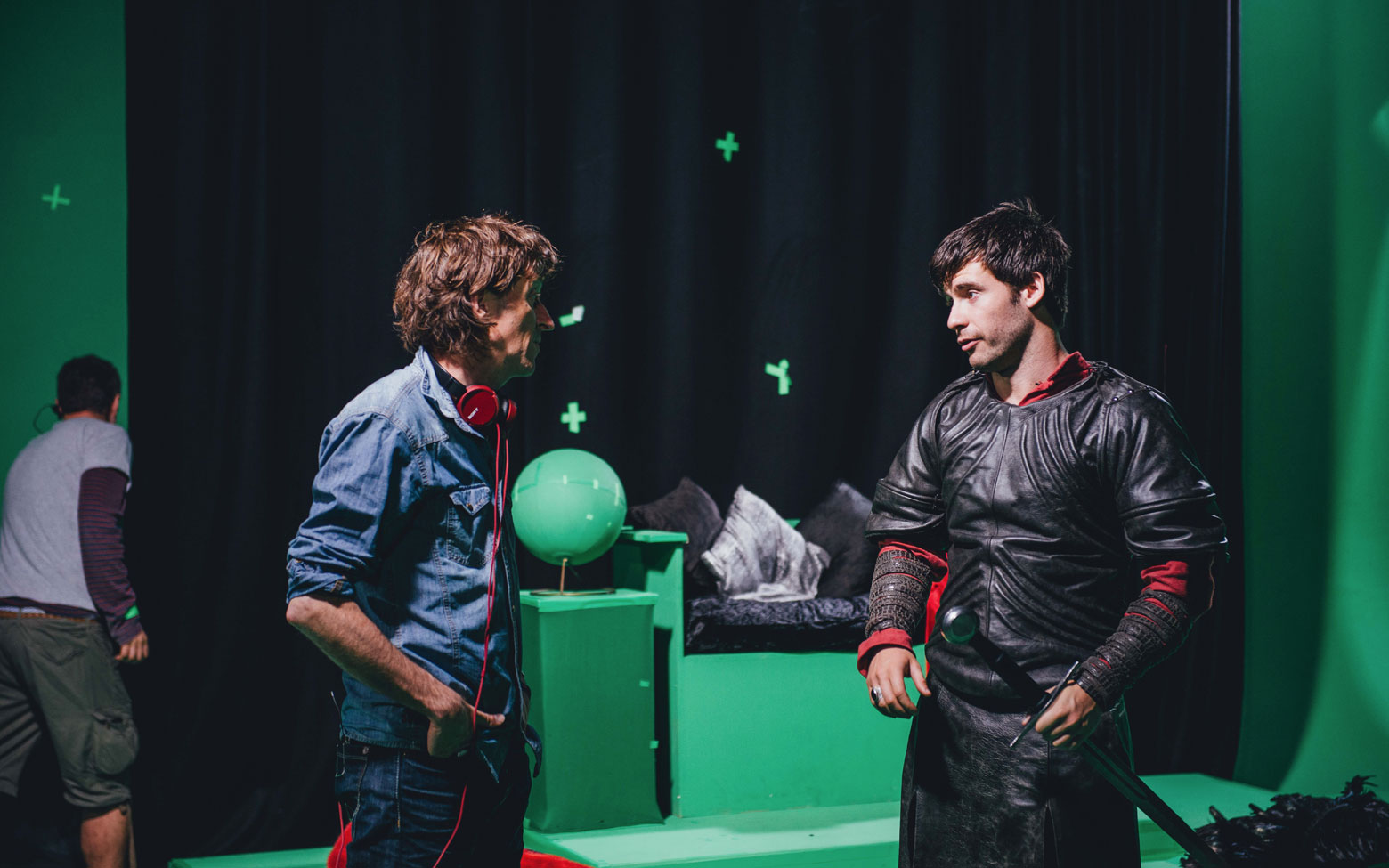 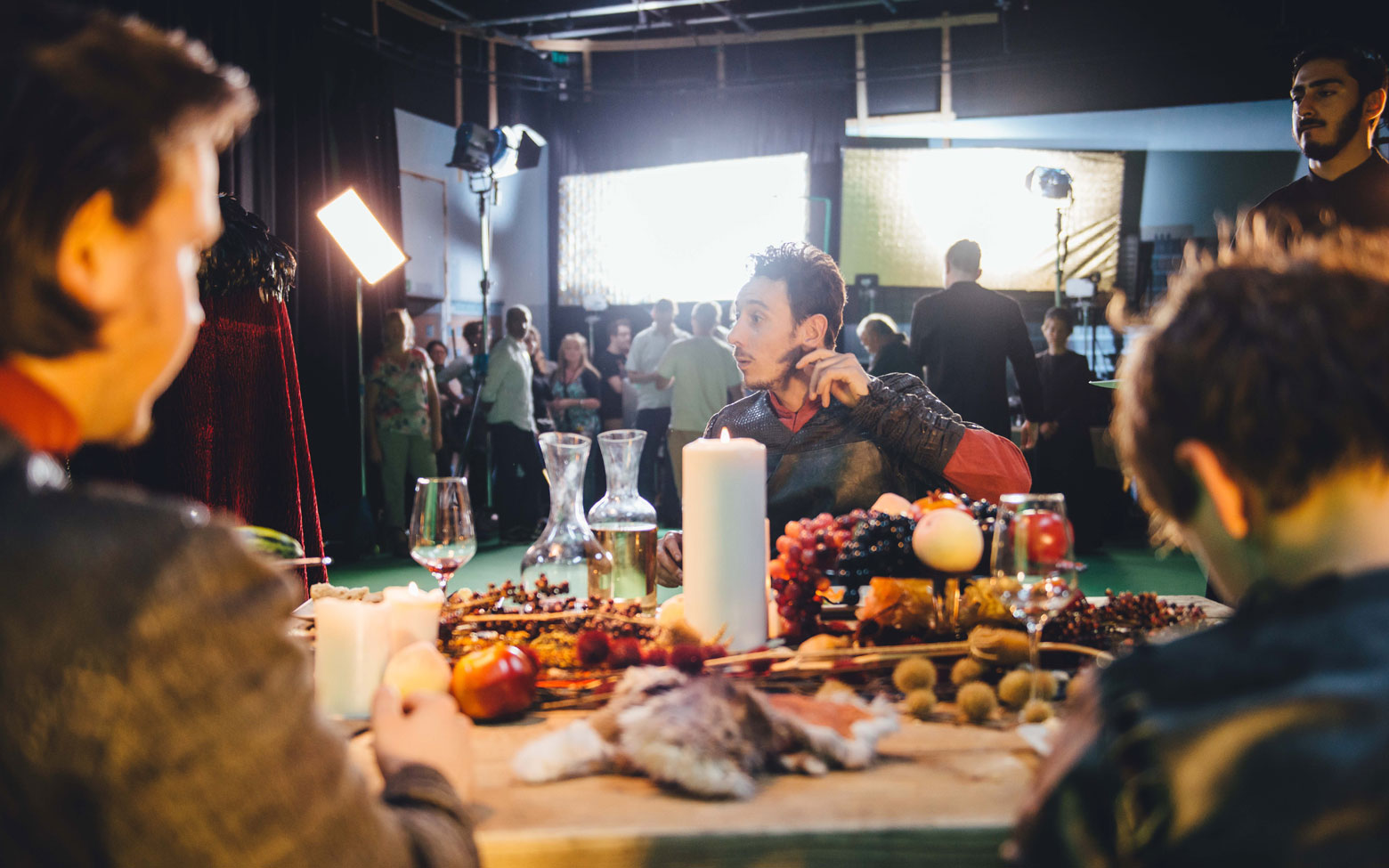 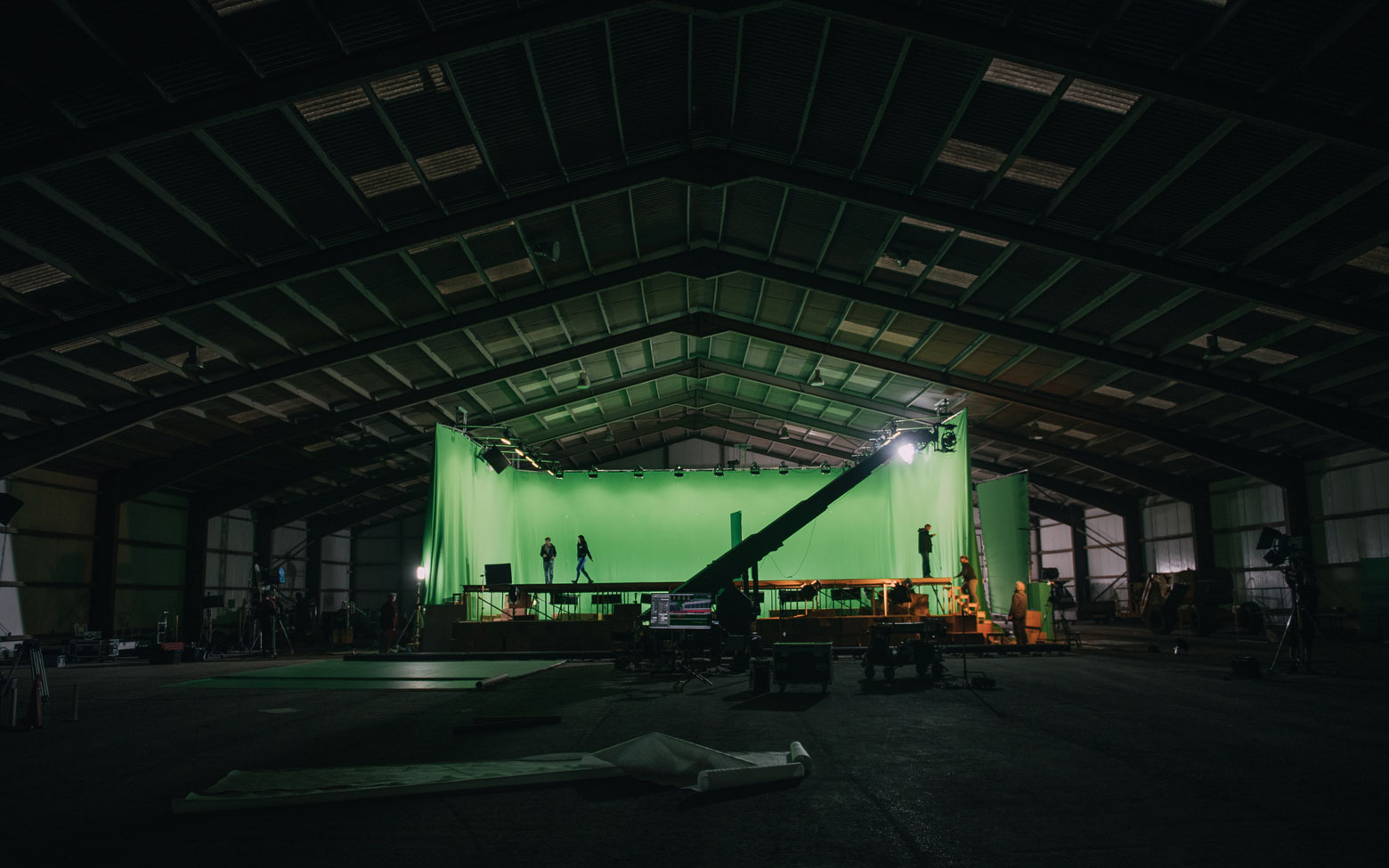 Photographs from the set.

It was obvious to all of us involved in the planning stages of this film that it was wildly ambitious to create a two-hour feature set in an almost entirely computer-animated world. To allow the live action to be combined with the computer-constructed sets, all the shooting would have to be done against a green screen, a process is both technically and artistically challenging for all the crew, including the actors. We were going to have to be as efficient as we possibly could, and that meant a lot of planning before we got anywhere near the studios.

During the script development process we had experimented with several ideas for a ‘world’ into which all the scenes could fit. We settled on the concept of a ‘globe’ which would contain all the rooms, halls, staircases courtyards and other spaces required by the script, and using a rough computer model of this globe we began storyboarding all the camera moves from one scene to the next. We knew that any changes to this plan once filming had started would have disastrous effects on the shooting schedule, so it was important to get it all fixed as firmly as possible. Simple computer animations of these moves were made and these helped us in the creation of a detailed shot list, which became our bible for the filming process that followed. 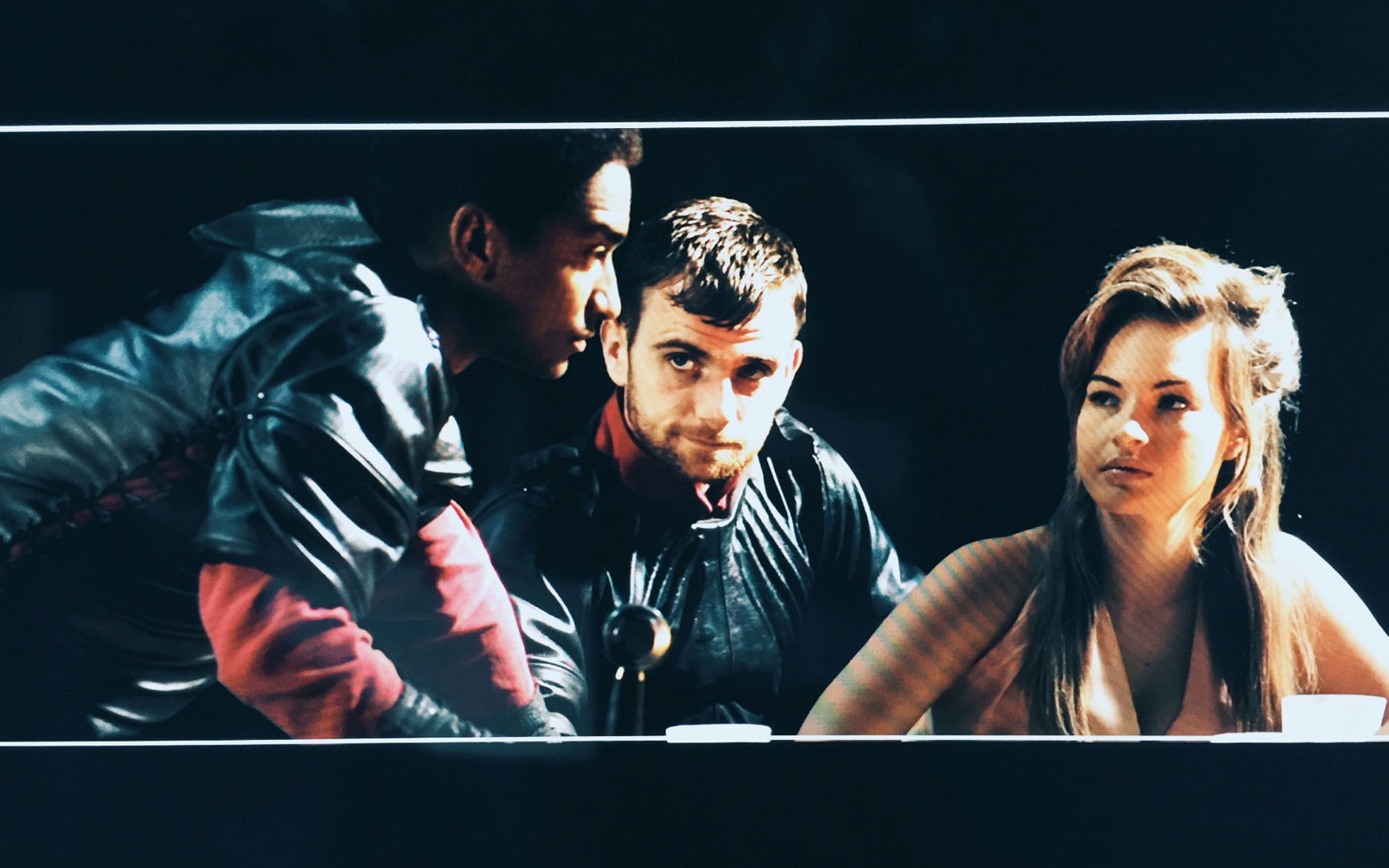 Photographs from the set.

We decided to split the filming into two separate shoots in order to allow us to focus fully on different aspects of the production at different times. Our first shoot, proceeded by several weeks of rehearsals with our leading actors, was designed to allow us to focus on the performances and the storytelling, whilst the second, shot a year later, was designed to capture the elements that would put the main action into context, with extras, wide shots and sweeping camera movements that could provide a sense of scale and cinematic depth.

In the first shoot we had access to two modest spaces, each painted in a very particular shade of green and crammed with lights and camera equipment that had been selected specifically for the purpose during several weeks of preparatory experimentation. Computers on set allowed us to see a preview of how the final footage might look once the green was removed and the colours adjusted, and costume, props and make-up department had to make adjustments based on this feedback. With the whole crew living at the studios for the duration of the shoot, the peculiar language of visual effects and green-screen shooting became absorbed into the everyday language of the assembled crew, and what began as a bewildering experience for many of the actors began to feel like second nature a few days in, allowing the performances and interpretation of the text, rather than the technical challenges, to lead the shoot.

With all the material from this first shoot gathered and roughly edited, we were able to create a first cut of the film which, though sparsely populated with people, contained all the crucial dialogue and narrative. Onto this we layered our plans for our second shoot, where we would be joined by a much larger cast and have access to a far larger space – but only for a week. The camera moves that had been performed by hand in our first shoot were tracked and analysed in software, ready to be recreated by an enormous robotic crane that was installed in the temporary studio. We worked with our choreographer and computer simulations to plan where our actors should be and how they should move to fit into our existing cut. The visual effects team set up on-set computers which could be synchronised with the camera and crane to display a mockup of our virtual world in real-time, which helped to make sure nobody walked through virtual walls or fell off the edge of our world. The ensuing shoot, planned down to the minute, was a technical challenge of extraordinary ambition which we pulled off by the slimmest of margins. Returning to the edit suite and visual effects department afterwards, it was clear that the extra scale and drama that the larger space and carefully choreographed moves added to the final frames was utterly transformative.

Now that all the second-shoot footage had been gathered, the post production process could resume, and frames of the final film began to appear. The visual effects team – an integral part of the creative dialog from pre-planning and throughout the filming – continued to work to tease out interpretations of the original concept artwork using the gathered footage in an iterative process that was both technically challenging and immensely exciting.

There was, of course, a lot of work to be done in removing the green screen from the footage in order to insert the actors into our world, and in stitching together different elements from both shoots into the long, flowing movements that join one scene to another in the final film. It was only during this process that the painstaking planning process and the rigorous data gathering undertaken during both shoots was really put to the test. As more of the film began to come together, we realised that all this extra thought and labour was successfully allowing us to realise the original vision. In breaking from conventions of feature-film making and inventing our own processes, we were finding that our ambitions were coming to fruition and something utterly unique was emerging.